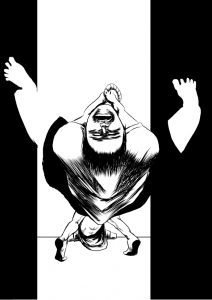 Many years ago while I was still in high school, my folks were planning on going away for the weekend, leaving my younger brother, Gus, and myself to fend for ourselves. He was a freshman in high school, and I was a junior. We were definitely old enough to be left alone and were happy for a bit of freedom. We had been anticipating my parent’s departure the whole week and had planned many things to do while we had the house to ourselves.

On Monday, four days before my parents were to leave for the weekend, my mother took my younger brother to the doctor’s office, because he had been complaining of stomach problems. This was nothing new; my brother had been complaining all his life about stomach problems. However, this time he was experiencing more pain than usual, so my mother reluctantly took him in to see yet another specialist.

This was to be the first of several visits to the stomach doctor that week. During the initial visit, the doctor ran a full battery of tests and then decided to administer a thick bluish, chalky shake comprised mostly of the chemical barium, which is an element that isn’t easily digested by the stomach. After a patient drinks it, the barium will slowly coat the digestive tract and show up on an x-ray. The doctor can then gaze inside the patient’s digestive tract and determine what is causing the patient’s stomach pain. Before the doctor could administer the barium shake, he had to wait until my brother’s stomach and digestive tract were completely empty. The doctor explicitly told my brother not to eat anything for an entire day, which was easier said than done, and then return on Tuesday for the barium shake and the examination.

Unfortunately, my brother failed to resist a late night leftover pepperoni pizza on Monday and failed to disclose this crucial fact to our mother and more importantly, to the doctor. The following day at the specialist’s office, the doctor gave my brother the barium shake. My brother winced as he forced the super thick substance down his throat. Afterwards, Gus stood naked behind an x-ray machine as the doctor peered deep into Gus’s stomach and digestive tract. Big gobs of partially digested pizza showed up clearly on the x-ray. When he discovered that his instructions had been disobeyed, the doctor removed his glasses and said sternly, “You are going to follow instructions this time or there won’t be another time. Is that understood?” The test was postponed for two days.

My mother and brother came home that Tuesday night, and she allowed my brother to eat whatever he wanted for one night, followed by a day of not eating. Thinking he might starve if he didn’t eat for an entire day, my brother ate like an ogre that night. He gorged himself, knowing that he could not eat for twenty-four hours after the following morning. He woke up, had a huge breakfast and then somehow made it through the rest of the day, Wednesday, without eating. The following morning, they went back to the doctor’s office for the second heaping helping of barium. Thankfully, this time the doctor was satisfied with Gus’s empty digestive tract and completed his examination without incident. Afterwards, the doctor informed my mother that Gus might be suffering from an ulcer and prescribed the appropriate medicine. The doctor warned Gus that the barium might cause constipation. Thus, the doctor advised Gus to consume ample amounts of fluids and foods high in fiber. Gus interpreted those words to mean: Eat a lot of food.

On Friday, we said good-bye to our parents and felt free. Gus and I were ecstatic. We were going to stay up late, order pizza, drink my parents’ liquor and watch movies all night long. We were also planning on throwing a small house party on Saturday night, even though we had been explicitly warned not to.

A strange thing happened that Friday evening. While watching one of the rented movies, my brother started to complain about severe stomach cramps. I naturally administered some stomach medicine, hoping it would ease the pain. Sadly, it seemed to have no effect. All night long, Gus groaned miserably. Being the older sibling, I felt responsible for him, but didn’t feel his pain justified medical attention. I had heard his stomach complaints all my life and knew they would subside, as did he, so I wasn’t overly concerned.

The next morning, I checked in on Gus and he hadn’t slept a wink. His sheets were soaking wet from his sweaty body and he was in excruciating pain. “Dude man,” I said, “you want me to take you to the hospital or what?”

“No more doctors,” he eked out. “I’m fine. Really. I just think I need to take a shit. But I don’t think I can make it to the shitter. Can you help me?”

“What? Get up you wimp!” I commanded.

Reluctantly, I jerked him out of bed. He was sticky like a glob of glue and could barely stand, so I grabbed both of his arms and dragged him to the bathroom, while he moaned in pain. I tossed him on the commode and left him to his own defenses. What else was I supposed to do: Wait until he was finished and then wipe his ass? Fuck that!

I ventured into the kitchen and heated up some of last night’s pizza and then crashed in front of the tube to watch some more flicks. After the first movie was over, I checked in on my younger brother like an expectant father. “Dude man, any luck?” I said through the bathroom door.

I made some popcorn, poured myself some soda and then eased back into the sofa for another movie. After the second movie ended, I checked back in on him.

“Gustav, what the fuck? Are you dead?” I said as I listened through the door and heard loud wailings. “Are you giving birth in there or what?”

“Dude, get your ass in here, now!” he yelled back.

That’s one phrase no one wants to hear from their brother. I mean, I am his older brother, but there are only so many things I would do for him. “I ain’t going in there,” I yelled back. “What are you, nuts?”

I can’t say that I was the least bit happy about what I was about to do, but I took a deep breath and went on in regardless. He was in serious pain; maybe I could help.

Excerpt from "The Fecal Anomaly," a short story in Hillel Groovatti's new book of short fiction entitled Totally Losing Face and Other Stories.