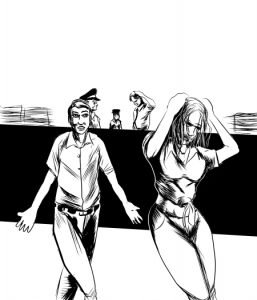 I was supposed to go to Thailand to hook up with a friend who I had met while traveling in Japan. Unfortunately, there was some confusion, and I ended up in Taiwan instead. I figure things happen for a reason, so since I was in Taiwan, I decided to make the best of it and travel around for a bit.

After about three weeks of traveling around the island, I wound up in a small town about four hours by train southeast of Taipei called Hualien. I don’t like big crowded cities so that’s why I headed towards Hualien, which is a much smaller city than Taipei and Kaohsiung and near the ocean.

Hualien is famous for Taroko Gorge, which is just a nice gorge, nothing much more to say about it. However, you would have thought the second coming had just arrived, judging by all the tourist buses that showed up to see the old gorge. Granted, it’s in a beautiful green canyon with a very nice view, but that’s about it.

After visiting the “gouge” of Hualien, as a referred to it, I checked into a run-down hotel right in the middle of a night market. A Taiwan night market, as its name suggests, is an outdoor market that’s open only at night. Every city in Taiwan seems to have its fair share of these markets. Thousands of people flock to the night markets to take advantage of cheap prices, crowded conditions and plenty of noise. This Hualien night market was nestled in a long, narrow, densely-packed street, where customers purchase everything from stylishly cheap fake-brand-named goods to stinky tofu, which, incidentally is the worst smelling substance known to man. It’s some sort of thick fried tofu that vendors sell in large chunks on the side of the road and the locals eat it up like candy. Every time I walk by a vendor selling stinky or chou tofu, I literally want to vomit because it smells like raw sewage.

Needless to say, I wasn’t sleeping that well, since my room was above the incessant reverberations from the night market below my hotel window, so I would often purchase a few large cans of Taiwan’s famous beer—aptly called Taiwan Beer—to help me sleep. The beer tasted okay, except it gave me the worst hangovers I’ve ever had. Rumor has it, they use formaldehyde as a preservative in the beer, hence the guaranteed headache the morning after.

There isn’t really much to do in Hualien. Besides the night market, there’s a movie theatre, a number of karaoke parlors, a few Pachinko gambling joints which house loud slot machines that run off of small steel balls, and that’s about it for fun in Hualien. I did discover one really nice restaurant though, which specialized in lamb and offered a really nice view of the ocean.

The restaurant served lamb, lamb’s milk cheesecake and lamb’s milk for your coffee. It reeked of lamb when you walked in. I got used to the smell and really enjoyed sitting down at the restaurant, looking out at the beach, reading, writing and pondering life. And the staff really seemed to like me and often tried to speak English with me. Hualien really kind of grows on you after a bit of lamb’s milk. But it suddenly dawned on me that my funds were rapidly depleting, and I needed to do something fast to increase my cash flow in order to continue my travels.

It’s really amazing how things just happen to work out while you’re traveling. I was looking for a job; low-and-behold I walked by an English school one day and a woman rushed out and accosted me. “Hi, you Englishy teacher?” she asked.

“What you name?” she asked.

“Burby Tetherbaugh,” I said. She tried to pronounce my name, but couldn’t. I had to chuckle at the way her tongue got completely twisted in her mouth as she spat out my name, “Booby Teetertow.”

She informed me that her name was Ms. Liu, before inviting me in to take a look at her school. I walked through the front door and two young secretaries sitting behind a reception desk greeted me with giggling smiles. The school consisted of three very small classrooms, a small reception area, a small teacher’s lounge area, and a small library composed of English teaching books and supplies. After looking around, Ms. Liu encouraged me to observe a class already in session. I had nothing better to do, so I quickly agreed.

“Yeah, yeah,” she said, pushing me in the direction of the classroom. I guess she really needed a teacher fast.

She guided me to a classroom, knocked on the door and immediately entered. The class of fifteen eight to twelve year olds crammed into the tiny room erupted with giddy excitement as I entered. They were so cute! A few parents sat around the back of the room, smiling from ear to ear. Ms. Liu said something in Chinese to the teacher, Ms. Yen, then to the class in Chinese and finally pointed towards me.

I waved to the class and then sat down at the back and smiled to the friendly parents sitting next to me. The young local female teacher stood up in the front of class and spoke at length in Chinese. Then she wrote on the whiteboard:

She held up flashcards and had the students insert the words from the flashcards into correct English sentences using the grammar points written on the board: This is a ball. These are balls. After the students were comfortable with those grammar points, she held up flashcards and called on individual students to formulate correct sentences. She rounded off the class with a quick spelling test. Ms. Yen was extremely patient and very encouraging to the students. Consequently, the kids and parents loved her. All in all, teaching English seemed very easy, and I was one hundred percent certain that I could do it after seeing how easy it was.

After the class was over, Ms. Liu asked me if I’d be willing to teach at the school. I said, “Of course!”

“Great, can you work this weekend?”

“You bet, but I don’t have a work permit,” I said, wanting to make things as legal as possible.

Ms. Liu said she was willing to sponsor me to obtain a teaching visa so I could legally stay and work in Taiwan. However, I’d have to work a minimum of twenty hours a week at her school. That sounded good to me. How difficult could this English teaching gig really be? After all, I spoke the language fluently. And once I grew tired of teaching I would eventually have enough cash saved to leave and continue on my travels. I could avoid all of this of course by making one phone call to my folks and ask them for money, but that would be too much like giving in.

Ms. Liu gave me some paperwork to take home and fill out. It was all in Chinese, which incidentally I cannot speak, read or write. She also gave me an address in Chinese of a government office that I needed to visit to sort out my paperwork so that I could legally teach English in Hualien.

The next day, at the urging of Ms. Liu, I hailed a cab and went to the aforementioned government office to start the process of getting a work permit. I gave the cabbie the Chinese address, and before long he dropped me off in front of an old green building that looked like it had been constructed in the 1930s. Inside, there were several officers lounging around behind long wooden desks.

I noticed one of those mechanical number machines, which spewed out numbers printed on slips of paper. I picked a number, 49, and patiently waited for my number to be called. I was the only customer there, but I politely waited anyway, not wanting to cause a disturbance. Meanwhile, the officers stared and smiled. Finally, a woman came up and said, “You wanna me helpa you?”

“Work permit,” I said, slowly and succinctly, and then showed her my number. She smiled and said something to everybody in Chinese and they all laughed and laughed. Then she told me that the number machine was broken. Ha, ha! “Why was that funny,” I thought. She led me to one of the uniformed officers sitting behind an orderly desk, and he smiled enthusiastically like he was so happy to be helping me.

Excerpt from "The English Virgin," a short story in Hillel Groovatti's new book of short fiction entitled Totally Losing Face and Other Stories.