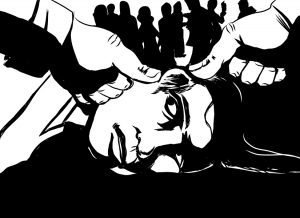 My workmate, Sven, confidently announced his presence at my house party, downed a few drinks and began mingling by my wet bar. Instantly, everyone within shouting distance noticed the incredibly large bandage he had draped on the side of his head, to the right of his temple.

I was tending bar, acting as DJ, introducing people and trying not to gawk at the right side of Sven’s face. Eventually, someone got up enough nerve, pointed to Sven’s bandage and uttered, “Sven what happened?” We all intently listened in for Sven’s reply.

“I don’t know, I was on vacation in the tropics, just got back today, and all of a sudden I developed this thang on the side of my head,” he said, shrugging his shoulders.

“Thang? What kind of thang?” we inquired.

Well, that piqued everyone’s curiosity. “Wanna have a look?” he asked. Sven wasn’t shy, so he carefully peeled back the bandage carpeting half his face, as our jaws dropped in utter amazement. I had a good selection of music going and everyone seemed to be having a good time. Then Sven wanted to go and show his big zit!

“Good gawd Sven, look at the size of that thang,” someone said as he peeled back the protective covering. I almost choked on my drink when I had a gander at it. I mean, it was large! And it was bulging out of the side of his head like a balloon that was about to burst.

“Why don’t you squeeze that thang and let the puss out?” someone asked.

“I tried, but it really, really hurts. I mean it fucking hurts like the devil!” Sven explained.

“Well, it hurts me to look at it,” said my longtime friend and coworker, Fred Wrangler, an engineer who fit the bill. He was a bit inebriated, we all were—I don’t play around when it comes to mixing drinks. “Why don’t you let me have a go at it?” Fred added. He’s the type of guy who’s reserved most of the time, but get a few drinks in him, and he’s the life of the party. Earlier on, I had seen him contemplating wearing one of my lampshades for shiggles.

We all thought Fred was nuts for offering to help out. “Well, okay,” Sven said pleasantly surprised. Actually, if it had been me, I would have told Fred to fuck right off! I mean, there is something inherently odd about a friend pinching your zit in front of a crowd at a house party. But Sven’s the type of guy who’d whip out his dick and slap it on the table if you dared him to.

Unfortunately for us, since he’d already uttered his approval, Sven was obligated to release custody of his massive zit to Fred, while the rest of us could do nothing but look on with intense curiosity. Sven tore off the protective bandage and placed that greasy, gooey patch on the bar right near my drink. I wasn’t going to touch that nasty looking thing. It really grossed me out!

Fred rolled up his sleeves and dramatically loosened up his fingers and neck while Sven bent over, laid his head—zit-side up—on the bar, and braced himself for the pain.

Fred moved in for the kill.

Jeanie from HR yelled out, “Maybe you should get some tissue first.”

“No, like some tissue paper Fredrick!” Jeanie yelled, rolling her eyes. She gets loud and bossy when she drinks.

“Here, we can use this,” someone said, holding up a heavily stained bar rag.

“I don’t think so; here, use this,” Sven said, pulling out a clean, red-checkered handkerchief from his pocket and handing it to Fred, who quickly stuffed it into his shirt pocket behind his pocket protector.

Satisfied, Fred pounced on his prey, put his thumbs across an ample amount of real estate on the side of Sven’s face, and began to squeeze with great force.

Sven’s eyes almost shot out of their sockets as Fred began to wrench his elbows. Everyone in the audience was cringing, as Fred seemed to be applying way too much pressure.

“I can see something making its way to the surface! Hang in there Svenny,” said Fred, as he struggled to gain leverage on Sven’s gigantic growth.

It was almost too much to bear. I had been cutting limes with a knife and seriously contemplated stabbing that zit to put Sven out of his misery. Then I thought twice about it and decided not to. It’s best to just let these things run their course. I figured Fred would tire quickly, or Sven would throw in the towel, and we could get back to the party. I had not planned on this circus act, but it was amazing how entertaining it was, and everybody was thoroughly enthralled. I had invited a few friends and a few coworkers over and they all brought a few friends with them and the party naturally swelled. The drinks loosened everyone up and now everybody was peering in at Fred bisecting Sven’s face! What next, a live appendectomy? I sat patiently through the exorcism. I looked around and didn’t even know half the people at the party. But that didn’t matter; they all seemed to be having fun, except for Sven of course.

The crowd had slowly closed in on the two men. Mouths were agape, eyes bulging. The tension was as thick as oatmeal. Then all the straining forced Fred to let out a massive fart, but the gaseous stench didn’t stop him from continuing to pinch Sven’s ginormous zit.

“Holy smokes Fred! You’re suffocating us,” yelled someone in the crowd. “I’d check your shorts if I were you,” said someone else. I grabbed the crusty bar rag and tried to twirl it around a bit to dissipate the odor. Someone else lit a match.

Sven’s head repeatedly slapped on the bar as Fred wrestled that humungous zit with all his might. The vibrations caused Fred’s glasses to fall right off of his face and onto the ground. While Sven’s face was mangled with pain, he began to moan softly until it became a loud, steady squeal, almost peeling the paint from the walls. Not to be out done, Fred began to moan in harmony and managed to grunt out, “This is hurting me more than you buddy!”

“Come on Fred, it’s not funny any more,” screamed Jeanie. I flashed her an it’ll-be-alright look as she glanced at me for some sort of guidance. I probably should have stepped in and put and end to it then and there, but unfortunately I didn’t.