Hey, have you heard this term “Centigrade”? I was talking to a Chinese person the other day, in English, and I mentioned “Celsius”. The person seemed confused at first, then corrected me with “Centigrade”. So I looked it up. Turns out the man who created the Celsius scale is actually named “Celsius”. His temperature invention dates back to 1742 and was initially called “Centigrade”. In 1985 the world decided to honor the man by changing the name of his temperature scale. Thus, the term “Celsius” became more widely used then “Centigrade” in the West. Apparently, the Chinese haven’t received the email yet.

Can you name any other famous inventions named after inventors

I guess it’s good that Mr. Celsius’s name wasn’t Shitasaurus. And that got me thinking, did Crapper really invent the crapper? Turns out he didn’t. However, he worked in the plumbing industry and did invent the flushing toilet and the ballcock, which we now refer to as the float in the toilet. And he invented the manhole cover. I find the two latter terms rather lacking imagination. I assume he just looked in his pants for inspiration concerning both terms. With “manhole” was he trying to imply that men have large holes that smell like sewers? I haven’t smelled any manholes except my own and well, okay, he has a point. Let’s move on.

So what other inventions are named after their inventors? We have gore-tex invented by Bill Gore. The Jacuzzi invented by Candido Jacuzzi. And the Zamboni coined by Frank Zamboni. I didn’t see many women on the list. The only ones with recognizably female names were Amelia Bloomer (She wasn’t the inventor), Anna Pavlova (She wasn’t the inventor either), and Mae West who respectively gave their names to a type of dress, a dessert, and a life preserver (Mae didn’t invent it, but people felt buxom when they wore it, hence the name). Why aren’t females equally represented on the list? Perhaps there are fewer female inventors or perhaps women aren’t vain enough to want to name an invention after themselves?

What’s the most important invention invented by women

This site lists 18 important inventions made by women. The most shocking of them all is—beer! Yes, this site claims that Mesopotamian women, not men, invented beer. Genius! Beer is quite possibly the only reason men get up and out of the house each and every day. Without it, where would we be today? Thank you, fine ladies of Mesopotamia for your tasty beverage!

What other items are named after people

We have cocktails named after people as well as food. That’s where Margaritas, nachos, and Tootsie rolls got their monikers. I didn’t see Harvey Wallbanger on any list so I looked up the drink. Turns out it may or may not be named after a real person. I’ve personally never had one before because the name of the drink kind of scares me: I’m afraid that I might hit a lot of things after drinking one!

Interestingly, John Montagu did, in fact, invent the sandwich, and yes, his title was the Earl of Sandwich at the time of creating his edible delight. According to Wikipedia, he was the 4th Earl of Sandwich and a well-known gambler who used to order sandwiches while betting on cards.

Stars in the sky are also named after famous people, as well as many bands. Oddly, many animals are named after famous people. That got me thinking. Were some people originally called “horse” and “platypus” and they named these creatures after themselves? Were most animals named after people and we just didn’t keep track? Like was there a Joe Aardvark who one day discovered that animal, gave it his name, and then disappeared in the manhole of history? Additionally, I wonder if some animal in the past was originally named after somebody like the Viscount of Pigdom or the Duke of Cuckoldry and then the animal’s name subsequently changed because it was not popular? I couldn’t find any information on that, but granted, I didn’t look very hard as I was consuming far too much of the modern variant of Mesopotamian brew to conduct research for this article.

Have you ever heard of a giant isopod 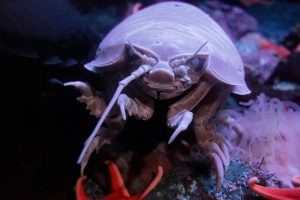 Speaking of animals, have you heard of the giant isopod? I just learned that it can go five years without food! And in the video below, it attacked a shark!!! Listen, “giant” is a bit misleading here. It’s only about the size of a big shoebox, but it attacked a huge shark and killed it! The giant isopod is one badass animal that I wouldn’t want to meet in a dark alley at the bottom of the sea. Consequently, I don’t think “isopod” is a justifiable name (Apologies to Billybob Isopod or whoever it was who named this crazy beast). This thing really gets medieval on sharks, thus it needs an appropriate Tarantinoesque name. How about “Badassmutherfucker”! Yes! If someone told you a Badassmutherfucker was crawling near you, you’d jump, which is what you should do!

Who the hell named the honey badger

While I’m on the subject, who in their right mind named the honey badger? This idiot obviously had no idea what a badass critter this thing actually is. A honey badger will not back down from anything or anyone, even an elephant! They have been known to bite off the nutsack of much bigger animals and wait patiently for the newly ball-less beast to weaken from loss of blood, then go in for the kill! If that isn’t nutty enough, honey badgers frequently feed on snakes and their skin is so tough that snakebites don’t even harm them. So the name honey badger really doesn’t suit this ferociously bold mammal. Some bees give honey, hence we call them “honey bees”. The honey badger, on the contrary, does not give a fucking drop of honey, instead it gives hell! Thus, I propose we change its name to the “Nastyass Hell Badger”!

What has the fastest punch in the animal kingdom

Have you ever heard of a mantis shrimp? These sea creatures are truly badasses! They have hexnocular vision where humans only have binocular vision. They also have twelve color receptors in their eyes where humans only have three. And one variety called the smasher can hit its prey with a hammer-like claw that is as fast as a bullet! NPR’s RadioLab created an episode about the eyes of the mantis shrimp and Planet Money produced a podcast about how the U.S. Congress tried to stop funding research on this amazing animal. Smasher is a good name, but mantis shrimp does not really do it justice. Thus, I propose a new name for this crazy punching crustacean in honor of its Thor-like hammer, “Wickedass Thor Smasher”!

Why did Joe Penisbreath change his name

And to finish it up, I’m reminded, for some reason, of that old story where Joe Penisbreath went to a judge to change his name.

“Rightfully so,” said the judge. “What would you like to change it to?”

“Why on earth,” asked the judge.

“Well your honor, I’m just sick and tired of people coming up to me and saying ‘Hey Joe, joe mama!’”

If you know any more name jokes or interesting things named after people, please comment below.