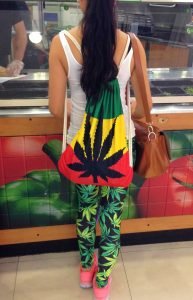 You ever see a beautiful woman and you can’t help but talk to her? Well, one day while walking through the Cloud 9 department store above the Zhongshan Park metro station in Shanghai, I noticed an amazingly attractive young woman dressed in an outfit that screamed: Hey, I love weed!

She wore a backpack designed with colors from the Reggae flag and right in the center was a huge pot leaf. In addition, she wore black pants with brightly printed green dope leaves bespeckling the entire thing.

Intrigued, I approached this exotic creature for a closer inspection. I said, “Hello” in Chinese and then wanted to say something complementary like, “Damn girl, these are the most fly threads I’ve ever seen in my life!” Instead, due to my poor Chinese skills, all I could muster was, “Your clothes look good.”

Flattered, she said, “Thank you” in Chinese. I could tell that she was a bit hesitant about speaking English, my native language, so I stuck to Chinese. Oddly, she did not appear the least bit high, so I blatantly asked her, “Do you like marijuana?” Incidentally, dama is the Chinese word for cannabis and it is illegal in China. However, hemp is cultivated in Yunnan, a Chinese province next to Laos, Myanmar (Burma) and Vietnam.

She seemed offended by my question and pointed out that weed was indeed against the law in China. “Right,” I said waiting for a wink or a slight smile or even an elbow to the gut. Any of those signs would have indicated that she was joking and that she smoked. Instead, awkward silence. I wanted to ask her why, if she didn’t get high, was she wearing clothes that seemed to clearly advertise her affection for bud. Instead, all I ended up saying was, “Why are you wearing these clothes?”

She simply stated that she loved Canada and was planning on visiting soon. “Oh, no wonder,” I said trying to be nice, but I really didn’t have a fucking clue what she was on about. After exchanging contact information, I excused myself and walked to the subway replaying our conversation over in my head trying to see if I missed anything.

Minutes later as the doors to my train were closing, I yelled, “Ah ha!” All the passengers looked up for a brief second from their mobile devices and stared at me. Since I’m a foreigner, some stared a bit longer. I ignored them all and pumped my fist in the air because I was happy that I had figured out what that chick meant and why she was wearing those dope clothes. I’m no Sherlock Holmes mind you, but occasionally I can put two and two together. So this is what I garnered from our conversation and from my limited knowledge of Chinese culture: She was wearing that weed-loving garb because she thought the marijuana leaves were maple leaves—Canada’s national emblem. Oh Canada, right? Duh!

Luckily, she wants to meet up for a language exchange: She can help me with my pathetic Chinese and I can help her with her limited English. If the subject of botany ever comes up, I’ll definitely leaf it out of the conversation.

The image above is from Groovatti’s archives.