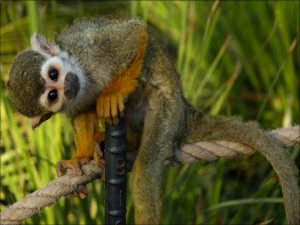 Hey, have you heard this: Monkey’s have a sense of fairness. Scientists have discovered that if you teach a monkey to exchange a rock for food, the monkeys can get upset if they aren’t treated fairly. In an experiment conducted by researchers at Emory University in Atlanta, Georgia, USA, two monkeys were given one identical rock each. When the first monkey gave its rock back to a researcher, the monkey was given a cucumber in exchange. Then the researchers decided to play a trick. The second monkey, which was in a cage in full view of the first monkey, was given a grape in exchange for a rock.

For the love of grapes

Apparently monkeys love grapes. So when the cucumber-receiving monkey saw that its neighbor got a grape, it was very unhappy, so much so that it threw the cucumber back at the researcher as shown in the hilarious video below.

How far can we piss monkeys off

Another group of researchers at Yale figured out how to piss off monkeys in a different way. In this experiment, two researchers were used to give out grapes to a group of monkeys: one researcher gave more grapes than shown, and one gave less. This experiment revealed that if you show monkeys one grape and then give them two grapes, they will be happy. However, if you show them three grapes and give them two, they will be very unhappy and will avoid you and any other tricky researchers if given a choice.

Who likes to be cheated

The moral of the story is: Monkeys don’t like to be cheated. Well who does? Who likes to be cheated? I mean, if you go to a grocery store and some dude holds up three oranges and only gives you two, you’re going to punch him in the face. Right? And you’re going to be very angry because the dude’s a dick! Exactly!

Can we upset other animals

Monkey’s know that. They know when people are being dicks. I bet you could conduct either experiment and get the same outcome with crows, dogs, ostriches, octopi, hippopotami, platypi, porpi, applepi, and snakes. Yeah, snakes! I imagine that a snake would get so fucking angry that it’d try to bite the tricky researcher. It’d draw its fangs and launch its body on the researcher’s neck screaming in snakese, “What the hell dude, you tried to trick me! You fucking bastard!” The snake would be squirting all that juicy venom inside the researcher’s body trying to kill ‘em just because the snake was cheated over one lousy grape or whatever the fuck snakes love to snack on.

Snakes get into the act

So basically, I think the ultimate conclusion that can be drawn here is: Don’t be a dick! Even animals know when you’re being a dick. Thus, don’t be a dick!