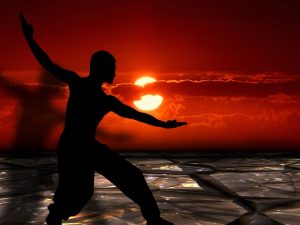 I was slightly perturbed that my Mandarin was misunderstood. Was it too noisy in the restaurant? Was I drunk? No way! So I asked the question again very slowly making sure my tones and my pronunciation were correct, “Where is the ‘wash hands’ room?”

I probably should have asked someone else at this point, but I was NOT going to be misunderstood. I had put too much time and energy into learning Mandarin. He probably just wasn’t used to listening to foreigners speak Mandarin Chinese. Or maybe he was an aboriginal who didn’t speak Mandarin well. In any event, I asked him again very slowly, “Where is the ‘wash hands’ room?”

Seeing this was getting me nowhere and my bladder was about to burst, I decided to attempt something my kung-fu teacher had been preaching to his students: Using your opponent’s strength to your own advantage.

I suddenly pictured the two of us sparing, me and the old man. We were using different fighting styles, so different that we were back-to-back swinging wildly at each other. I had to somehow enter his drunken zone in order to engage with him. But how?

I thought about asking him the same question for a forth time then stopped myself. “Use his power,” I heard my shifu say.

“Yes, yes, yes,” the old man said with a broad smile, suddenly thankful that this stupid foreigner understood his Mandarin. Now we were engaging.

“Do you know what I really have to do right now?”

“Oh sure, right over there,” he replied pointing down a dark hallway.

“Thank you very much, you saved my life,” I said jokingly.

I walked down the hallway and found the toilet or WC (Water Closet) as they refer to it. Success! Sometimes you have to go with the flow to get the flow going.