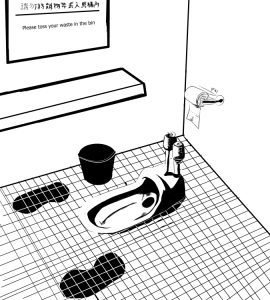 This squat shitter was not your standard disgusting rural Mainland Chinese train station squat shitter, no, this was Singapore so the shitter was nice and clean, and it sported some helpful bells and whistles. One of the hardest things about using a squatter is trying to figure out where to put your feet. If you’re too far back, you’ll miss the porcelain boat and lay cable on the ground behind the shitter. If you’re too far up you may miss the front lip of the porcelain boat and piss all over the ground in front of the device, and urine could get all over your shoes or worse, you could slip when you stand up and fall into the shitter!

No need to worry, this squat shitter was designed with embedded footpads so you could be assured of lining up properly. It also came fashioned with an automatic flusher and a stainless steel table secured into the wall, which actually came in handy later on.

Now, one end of the porcelain boat had a round hole filled with water and the other end was dry porcelain. It was difficult at first to determine which way to face, but I correctly decided to use the footpads as guides. I dropped my drawers and naturally aligned my feet facing towards the door and anus over the drain hole. Note: due to plumbing constraints, some squat shitters are bass-ackwards; in other words, the drain is closer to the door. In any event, always position your ass over the drain hole, not over the dry porcelain, because turds laid on the dry tarmac do NOT flush well. Water flows towards the drain hole and the water pressure usually happens to be very low. If it’s high, then water will splash off the turd and hit you in the face, and nobody wants that!

As an extra bonus, by placing your buttocks over the drain hole, you may even receive a refreshing splash of water up your bum—if you drop a big enough piece of shit and you’re hovering close enough to the drain—which definitely wouldn’t happen if you dropped a steaming beauty onto the dry tarmac.

The final thing to note when squat shitting is to make sure your penile member (if you have one) is pointed downward towards the porcelain. When I shit I also like to expel my urinary juices. I don’t know if everyone is the same. Some may prefer to do one or the other, not both. If you’re like me, make sure your penis points downward at a 90-degree angle when squatting. If it doesn’t, you’re bound to piss all over your pants or shoes (Hence the sign on the door: Mind Your Head When Squatting). I sussed out this potentially humiliating problem before any damage could occur by grabbing my lizard with my free hand before urinating and directed it towards the porcelain.

So there I was holding my pants and underwear in one hand, my cock in the other, leaning forward at a nice angle, making sure to hover over the drain, feet aligned properly, facing the door, and then I opened my cheeks and freed the baby.

I let out a massive fart afterwards, but unfortunately, the squat shitter does not allow for your typical low basal fart sound to reverberate around the porcelain bowl like you naturally get from a standard crapper. Had I been using a standard shitter and expelled my long brown piece of art followed by a long lustrous fart, the sound alone would have resonated in the basin for a good ten seconds. I was a bit miffed at being denied this little joy. But one nice benefit to the squat shitter, your cheeks never touch the porcelain, so it’s more hygienic. And since your cheeks are spread out further while squatting, there is less fecal matter attached to the sidewalls of your ass, yet another bonus and good for the environment—less toilet paper.

My knees were a bit uncomfortable during the whole ordeal, but I think I got a good thigh workout. A serious downside to the squat shitter is the squat position is not very conducive to reading, unless you’re really good at squatting. And if you’re not used to using a squat shitter, during a long session your knees could give way, you’ll start wobbling uncontrollably, and you could fall back into the porcelain and right onto your own excrement. But by following the guidelines previously mentioned and with enough practice, anybody can master the squat shitter.

One final safety tip: make sure there’s enough toilet paper in the stall before you enter. Some places in Asia sell it in tissue packets in a coin-operated machine hanging on the wall outside the john. You may have to go through a few pairs of perfectly good socks before you get used to this. Luckily for me, this particular stall had toilet paper.

After I completed this particular mission, I unfortunately happened to use up the meager amount of toilet paper provided; and at dinner the night before I overdid it (The restaurant’s chou tofu was to-die-for) to such an extent that I had quite a large parcel to deliver to the government, or wherever these things go, and, of course, it wouldn’t flush down the drain. I accidentally undershot the hole and it landed smack-dab on the dry porcelain, a major no-no. The automatic flusher sent water gushing over and around my goods and my pants got a nice brown-water spritz. But my turd wasn’t budging. It just sat there. I flushed again, but no movement occurred. It seemed permanently adhered to the tarmac.

I looked around the small stall for something to push it with, but there wasn’t anything and I didn’t want to use my socks! There was a trashcan in the stall; however, but I wasn’t about to pickup a disgustingly stained trashcan. Thus, I had a dilemma on my hands. I thought it was bad form to just leave a steaming duce in the bowl for the next guy. So I improvised, as you often do in Asia, and flushed it again, then gently nudged my brown torpedo towards the drain using my shoe (Luckily, I didn’t have to kick it!). Instead my nudge freed it enough for the water to send my poo swiftly on its way.

“Mastering the Squat Shitter” is a short story in Hillel Groovatti’s new book of short fiction entitled Totally Losing Face and Other Stories.