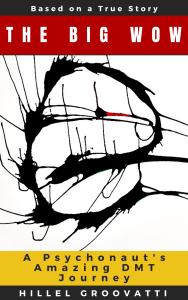 The following is an excerpt from this short story.

That trip was insanely wowwer than wow; it was the Big Wow! And I mean BIG! Mind-blowingly BIG!
My body sang with celestial wonderment as supernova chakra electrified every atom of my core!

Warning: DMT is an incredibly powerful drug! According to some experts, it can trigger schizophrenia, OCD and PTSD. If you have mental problems or your family has a history of mental problems, do not take DMT! If you are curious about DMT, please read up on it and check out some of the links at the end of this story.

Based on an actual DMT trip.

I’m in Bangkok, Thailand for a business seminar. After it’s over, this fellow attendee named Crux turns to me and says in a thick southern accent, “You wanna get high?” He said “high” with about four syllables.

Next thing you know, we’re on his balcony in the late afternoon at a new boutique hotel overlooking the sprawling city as the rain starts coming down. We are both sitting with our legs crossed on the ground as it begins to pour.

Crux passes a pipe, turns to me and says, “You ever try DMT?”

“I’m a psychonaut,” he says, smiling like a Cheshire cat.

He’s in his mid-thirties, from Northern Florida and has a crew cut and blond hair. He’s wearing a dress shirt and tie in the middle of summer in Bangkok. The last thing you would imagine him to be is a psychonaut. In fact, he looks more like an accountant.

If you’ve never heard of DMT or Dimethyltryptamine, it’s an intense mind-altering drug that causes powerful hallucinations and sometimes near-death illusions. DMT does occur naturally in many species of plants and animals including humans. It’s a key ingredient in ayahuasca, a psychoactive brew used by shamans in the Amazon to gain spiritual insight. In addition, DMT may play a role in REM sleep and may be released when we die to ease our pain, but the jury is still out on what exactly this drug does in our bodies.

Terence McKenna, a world-renown psychonaut and DMT expert, once stated, “It was really the DMT that empowered my commitment to the psychedelic experience. DMT was so much more powerful, so much more alien, raising all kinds of issues about what is reality? What is language? What is the self? What is three-dimensional space and time? All the questions I became involved with over the next twenty years or so.” Source

My buddy, Rip, is a big Terence McKenna fan and has been sending me info on DMT for years. He’s also been dying to try it. So, when Crux turned to me and started talking about DMT, I listened with a heightened sense of curiosity.

Below is his story. He’s asked me to change his name and to not provide too many details about him as he doesn’t want his psychonauting to get out and jeopardize his current job.

(In Crux’s words) I was helping a friend move into his apartment once in Florida and we kept walking by this dude sitting out on his balcony as we were carrying stuff into my friend’s new place.

Eventually I stuck out my hand, just trying to be neighborly, and said, “Hi, I’m Crux.”

He said his name was Vape and before too long, we became best buds. It’s weird how shit like that happens, you know what I’m saying!

Turns out Vape is a chemist. The guy is a man of a very few words, but when he speaks, you listen. You know me, I’ll talk your ear off about nonsense for hours, but not Vape. He keeps his words mostly in his head, but damn if he doesn’t know his shit about chemicals!

It was Vape who first turned me on to DMT. He knew how to make it from scratch and bought all the ingredients online at some Deadhead website.

One day I was over at his place and he gave me just a taste. He sandwiched some DMT between two pieces of weed and had me smoke it. (DMT actually tastes like shit, hence the dope sandwich). I took one hit and I kid you not, the second I exhaled, I was tripping! It was that fast! Lightning fast! Like someone flicked on a switch.

Vape said the body metabolizes DMT instantaneously, so that explains the super-fast high. But almost as quickly as I exhaled it, the trip was over and done with. It was as if a sudden earthquake had occurred and just as you catch your breath and are about to hightail it out of the house to save your ass, the earthquake stops and everything’s back to normal. It was trippy-weird like that.

Vape gave me enough DMT that day for a powerfully hallucinogenic trip and sent me on my way. The only instructions that he told me were to huff and huff the pipe till I couldn’t huff no more.

“Whatever you do,” he said, “resist the urge to put the pipe down and enjoy the ride. You’ve gotta put enough DMT into your system to break on through. If you don’t break on through, you won’t have gone far enough and the entire trip will have been wasted!”

Well, that sounded easy enough. I just needed to arrange a good day and time to take it. I didn’t want to do it on a work night as I had no idea what effects that thing would have on me. Sometimes the effects of shrooms or acid will last well into the next day. Just to be safe, I decided to try it on the following Saturday.

A FEW REASONS NOT TO SMOKE DMT

Patricio Dominguez: A warning about DMT

What to think about before taking DMT

What The Machine Elves Told Me On DMT

What’s the DMT trip like? Dimethyltryptamine high dose trip report “too much DMT”

Dimethyltryptamine (DMT): What I wish I was told before my trip! (WARNING: I DIED & LOST EVERYTHING)

Owsley says DMT made the volume of music louder

Terence McKenna – DMT is Everything!

Terence McKenna and Beyond

A Chronology of Terence McKenna-Related Books, Ideas, People and Other Things

I Did DMT At A Castle In Paris And Went Straight To Hell. Here’s What You Should Know Before Doing Psychedelics.

DMT in the News

Thank you for reading “The Big Wow: A Psychonaut’s Amazing DMT Journey”!