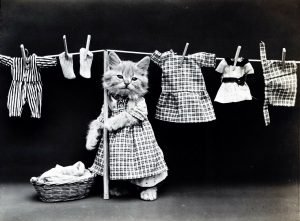 We had been together for five years, through thick and thin, and I knew he was pissed off, rightfully so.

I had to apologize to my cat the other day. It’s a long story, but essentially this is what went down.

My cat, Sebastian, was sitting on the couch a few weeks ago getting high, eating catnip, and playing with my laser pointer.

I was in a bad mood and had just gotten home from a tough day at work, so I yelled at him to smoke outside. He knows better than to get high inside. I’ve told him a million times! He reluctantly went out to the porch and continued smoking there, where he’s supposed to smoke.

A few days after that, I was on the very same couch, getting high, eating chips, and playing video games in the very same living room where I had previously told Sebastian not to get baked. Seebs, jumped in through an open window and froze when he saw me. He couldn’t believe that I was doing exactly what I had told him not to do!

Just to be a dick, he casually sauntered over to my smartphone with a shit-eating grin. My bloodshot eyeballs followed him the whole way, like watching a dream that I had no control over.

I was too damn high to do anything except say, “Don’t you do it!” Because I knew what was coming. We’d been together for five years, through thick and thin, and I knew he was angry, rightfully so.

He slowly crouched over my smartphone, which was charging on a desk out of reach, and looked right at me.

“No, don’t you do it Sebastian,” I yelled, but my warning fell on deaf ears.

Suddenly, he pissed all over my brand new iPhone!

I was livid, but again, too stoned to do anything immediately, except throw my shoe at him. He quickly ran away, snickering the entire time, while I sat quietly and stewed and plotted.

One thing about Seebs, he always likes to wake up late on Sundays, have a bite, and then troll the neighborhood for some feline companionship. He followed this Sunday routine like clockwork. I knew this. So that Sunday afternoon, I waited patiently till he hopped out the window.

Unbeknownst to him, I had carefully crafted my revenge. As soon as he left, I executed my devious plan. Firstly, let me reiterate that I was extremely angry that he had pissed on my iPhone! Furious! That was way uncool! I was so angry, in fact, that I pissed all over his litter box and left a huge shit right in the center of it. I did! And get this, my massive turd was covered in corn and I don’t mean to brag, but it was a real masterpiece! It stunk to high heavens too.

I know, crapping in your cat’s litter box is pretty juvenile, I admit it, but at the time it seemed like a great idea.

Sebastian rambled on in around midnight and curled up next to me on the couch while I was binge watching vids on Netflix. The whole time I acted like nothing was wrong. I petted him as I usually do, poured out some milk, then eventually went to bed.

I left for work the following Monday and when I returned he had obviously visited his litter box and seen my little surprise. I know this because I walked into my bedroom and he had retaliated: He had sprayed my entire room with his cat essence. I mean, he doused everything in my room as if his little hose was turned on full blast. You can’t get that smell out either! It’s gross!

This was full-on war! Game on!

Not to be outdone, I went to the pet store the very next evening and bought the most ridiculous cat costume that I could find. It was a Hello Kitty outfit with a big white hat wrapped with a pink ribbon, a red bow tie, white and pink pants, a pink top and red booties. I even threw in a tiny curly blonde wig too. Just for shits and grins, I also bought one of those cones that vets make animals wear so they won’t pull out their stitches.

When I got home, I put it all on Sebastian, giggling the entire way.

Once fully dressed, Seebs looked ridiculous. It was classic, the costume made him look like a pouting princess. It was purrfect! It was so good that I made him wear the cone and that humiliating outfit for an entire week!

Needless to say, he was incensed.

Nevertheless, I thought it was the funniest damn thing to watch him stroll around the house wearing that cute outfit and that gawd-awful cone that looked like a lampshade. I pissed myself laughing each and every day. However, he was so infuriated that he wouldn’t even stay in the same room with me and he never went outside, not even once.

A week later, I took pity on him and removed the cone and his cute costume. He immediately ran outside and didn’t return that evening. When I left for work the following morning, he wasn’t around either.

I knew he was pissed off, but didn’t realize just how angry he was.

That night, when I got back from work I was shocked! He had really taken it to the next level! He had gone on a rampage! He had scratched up all my shit: TV, computers, my guitars, my bedding, my books, my couch, practically everything!

I was fucking fuming! I mean, I was so angry that I wanted to string him up! Instead, I cut his balls off! I didn’t do it myself, of course, went to a vet and had Sebastian neutered. Really! That shit he did to my stuff just wasn’t right! He took it too far! You can’t destroy another dude’s property like that; he crossed the line.

After the ball-snipping operation, Sebastian came home from the vet’s all drugged up and wobbly like a drunken old man. I carefully laid him on the sofa and he immediately turned his back to me. Even in the state he was in, he was beyond angry. And wherever I sat or walked about the apartment, he turned away from me.

Once he regained some semblance of normalcy, he took out his little suitcase, put in some catnip, a few scratchy toys, his laser pointer, a one hitter, and then put on his cap and left.

As Sebastian was leaving, I said, “Dude, I’m sorry! I really am!”

But sorry wasn’t cutting it, not this time.

Sebastian just shook his head and slammed the door as he left.

And that was that, I haven’t seen hide nor hair of ’em since.

The moral of the story is that cats really aren’t finicky, no, what they are is assholes! I mean, come on, really? After all I did for that cat, after all we’ve been through, he up and walks out on me! Real douchey!

What does your cat do to piss you off and how do you get back at your cat, please comment below.

Posted in Humor and tagged relationships