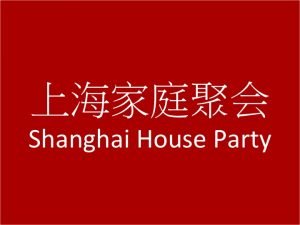 Showed up to an apartment party on a cold and wet Sunday night in Shanghai in January. It was billed as a pre Chinese New Year party. We had to bring out own beverages and a present. I brought beer and a scarf as a gift.

Our host, Prissy, met us at the door, gave us some slippers and welcomed us in to her cozy three-bedroom apartment. She was very vivacious and a gracious host. She was tall and thin and spoke very good English.

About 20 people showed up. We ate and chatted then a wine expert gave us wine and had us guess what type of wine each glass was. I wasn’t very good.

Weirdly, at one point in the evening, I noticed Prissy taking her small dog into her shower and encouraging it to pee there. I guess some Shanghai dog owners are lazy and don’t take their dogs out to relieve themselves.

Then two salsa dancers performed a few dances. The second one was very risqué for China and the locals weren’t cheering as much for the second dance as they were the first. I had to look away to stop from being too aroused! I mean, the female dancer was hot, showing a lot of leg and mid riff while her t-shirt that said “I love Salsa” was tied tight to her thin waist. And her knee was wedged right in her male dancer’s crotch. And finally, the living room was small and she kept shaking her tight mini-skirted ass in front of my face and her legs were so toned! She kept staring at her partner and smiling, they seemed to be having a blast. She was oblivious to the effect she was having on the rest of us!

Afterwards, we had to show the gifts we brought and explain what they were. Thankfully I brought a fairly expensive scarf and not a cheap one as my friend suggested, “You don’t know them, so why buy something expensive?” Well, it turned out that we drew for gifts and one of the people that came with us, my friend’s friend, ended up winning my gift. So I was glad I’d paid more! I won a sexy box of chocolate. The chocolate pieces were all of people in different sexual positions. I didn’t know if I should eat them or perform them, or both!

As the night was winding down, we all sat on the floor, shuffled a deck of tarot cards, drew a card with our left hand, then took a picture of the card with our smart phone camera. A tarot reader asked us individually what we thought the card meant, and then she explained the meaning. I drew a card depicting a person playing cards. I thought it meant I liked to gamble. Instead, the tarot reader said it was a very good card and meant I now had control of my fate as I was handling the cards and could choose the direction I wanted to go. I liked that, I liked that a lot!

The night ended as guests started to leave. I took a cab home pondering the cards I would now like to play.